Not So Fast, Fast Windows Antivirus 2011!

Windows Security alert
Your system might be at risk now.
Windows reports that computer is infected.
Antivirus software helps to protect your computer against viruses and other
security threats. Click here for the scan your computer using Fast Windows Antivirus 2011.

INFILTRATION ALERT
Your computer is being attacked by a Internet Virus.
It could be a password stealing attack, a Trojan – dropper or similar.

System warning!
Intercepting programs that may compromise your privacy and harm your system has been detected on your PC. It's highly recommended you scan your PC right now.

"System warning!
Continue working in unprotected mode is very dangerous. Viruses can damage your confidential data and work on your computer. Click here to protect your computer." 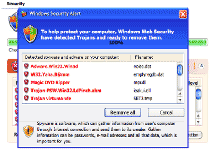 If you are concerned that malware or PC threats similar to Fast Windows Antivirus 2011 may have infected your computer, we recommend you start an in-depth system scan with SpyHunter. SpyHunter is an advanced malware protection and remediation application that offers subscribers a comprehensive method for protecting PCs from malware, in addition to providing one-on-one technical support service.