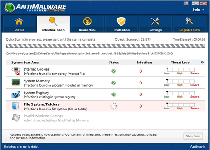 The Software 'Solution' to a Threat that's Part of the Problem

Activeris Antimalware is one of the two most common variants of scamware, a fake anti-malware product with limited to no ability to detect real threats, but full-fledged functions for detecting fake infections, albeit ones that are identified by technical aliases that resemble legitimate alerts. Activeris Antimalware is most closely related to Advanced System Protector and other offshoots of that particular rogue anti-malware program, and, like it, is meant to encourage the purchase of its software without providing legitimate security features that would warrant purchasing.

In theory, most Windows applications may be vulnerable to this attack, but Activeris Antimalware currently centers its efforts on depriving compromised PCs of access to legitimate security programs. Accordingly, your ability to use security software or even basic Windows tools like the Task Manager may be crippled, as long as Activeris Antimalware is active.

The Active Way to Resolve an Activeris Antimalware Dilemma

If you are concerned that malware or PC threats similar to Activeris Antimalware may have infected your computer, we recommend you start an in-depth system scan with SpyHunter. SpyHunter is an advanced malware protection and remediation application that offers subscribers a comprehensive method for protecting PCs from malware, in addition to providing one-on-one technical support service.