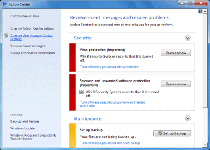 The Fake Windows Action Center's attacks may be used in conjunction with attacks from many types of fake anti-malware programs, but FakeRean scamware is especially prone to such exploits. Some samples of such fake anti-malware programs that SpywareRemove.com malware experts are familiar with include Antivirus Pro 2010, Vista Anti-Spyware 2011, Total XP Security, Vista Home Security 2013, Win 7 Internet Security 2013, XP Guardian and Win 7 Security 2012. As you can see from these examples, FakeRean scamware includes highly variable brand names that often attempt to portray themselves as being affiliated with specific versions of Windows.

If you are concerned that malware or PC threats similar to Fake Windows Action Center may have infected your computer, we recommend you start an in-depth system scan with SpyHunter. SpyHunter is an advanced malware protection and remediation application that offers subscribers a comprehensive method for protecting PCs from malware, in addition to providing one-on-one technical support service.