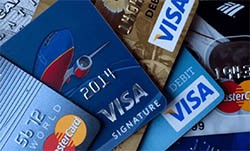 We tend to find out the hard way that hackers are naturally relentless in their efforts to attack people in one way or another. In what appears to be an attack on the hospitality, gaming, and restaurant industries, is a scheme conducted by Ukrainian hackers who have reportedly targeted over 100 U.S. companies in addition to compromising 15 million payment cards.

There are several companies that have succumb to a group of Ukrainian hackers who have breached data within the notable entities of Arby's, Red Robin, Chili's, and Chipotle Mexican Grill Inc. to name a few. The FBI (Federal Bureau of Investigation) and the top federal prosecutor in Seattle, where a criminal case related to the hacking was filed, told reporters that they don't think the attack was state-sponsored by Ukraine.

The hack looks to be a trio of Ukrainians that were identified as high-level members of the Fin7 cybercrime group. The group of hackers is believed to be one of the three largest criminal computer intrusion syndicates, as identified and investigated by the FBI.

In the scope of how hackers are able to infiltrate companies and their data, it lies with vulnerabilities that may have been exploited within servers, website, or data centers. Such vulnerabilities aren't necessarily the fault of administrators but rather the hackers are aggressive in their efforts.

With the reported 15 million payment cards supposedly compromised, hackers could have scored a large amount of data that may later be used against the victims in the data heist. However, in not knowing exactly what specific data was stolen or if any personal data was taken, there is no way of knowing of the 15 million payment cards data will lead to issues in the weeks, months or years to come. For now, computer users are always urged to be vigilant and keep tabs on their personal accounts, change their passwords often using a strong password, and to keep their computer software updated to prevent vulnerabilities.

Currently, none of the known companies that have been hit with the so-called data breach by Ukrainian hackers have spoken out regarding the specific damages. It could be that the companies hit by the breach could be assessing what data was compromised if any.