A scare-serving email campaign is on the loose and marked with 'High Priority', is jacking the good ole Federal Bureau of Investigation (FBI). Here's a look at the tainted email:

Body: Sir/Madam, we have logged your IP-address on more than 40 illegal Websites. Important: Please answer our questions! The list of questions are attached. pbu bx ng

Scamming is a billion dollar industry and as evidence by their brand-jacking the FBI, cybercriminals are not bias or prejudice and are willing to do whatever to get a huge piece of your pie. Stealth malware tools like Trojan.Zlob.2.Gen will deceptively gain entry and quietly setup the malicious attack. All the while the PC user doesn't have a clue until bells and whistles go off in the form of alerts and warnings, another ploy by Trojan.Zlob.2.Gen. 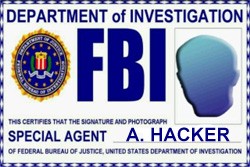 When potential victims download the attachment (document.zip), instead of getting the promised list of questions, Trojan.Zlob.2.Gen drops its malicious program onto the victims PCs and triggers a series of fake alerts, scans, and reporting as proof a security breach has occurred.

Midst the assault of pop-ups alerting of an intrusion, some slick-looking interface, XP Total Security, appears of nowhere and runs an unauthorized scan. Unlike the poorly written scam-advert, the interface looks professional since it is modeled after a legitimate Microsoft product design, but just like they spoofed and jacked the FBI, they did the same to Microsoft. XP Total Security is a worthless piece of software and was not designed to protect your data or your PC but to steal it and rob you blind.

XP Total Security Firewall Alert
XP Total Security has blocked a program from accessing the internet
Internet Explorer is infected with Trojan-BNK.Win32.Keylogger.gen
Private data can be stolen by third parties, including credit card details and passwords.

System Hijack!
System security threat was detected. Viruses and/or spyware may be damaging your system now. Prevent infection and data loss or stealing by running a free security scan.

Privacy threat!
Spyware intrusion detected. Your system is infected. System integrity is at risk. Private data can be stolen by third parties, including credit card details and passwords. Click here to perform a security repair.

Stealth intrusion!
Infection detected in the background. Your computer is now attacked by spyware and rogue software. Eliminate the infection safely, perform a security scan and deletion now.

When you think about it, not all the alerts are fakes, although all are misleading. Your system has been 'hijacked' and if you try to use your browser you will clearly agree, since you will be forcibly routed to unwanted or malicious websites selling XP Total Security.

You are actually experiencing a 'privacy threat' and 'stealth intrusion' but the enemy is the very thing offering to help you and that is XP Total Security. Do not fall trap and do not buy or download this poisonous software.

Doing nothing will not stop Trojan.Zlob.2Gen from completing its tasks, in fact, you should immediately disconnect any Internet connection until you are certain all traces of Trojan.Zlob2.Gen have been removed from your PC. You should also contact your financial institution and change your security credentials as a safety precaution.

Trojan.Zlob.2Gen may include a rootkit and this allows the vermin to embed its virus in the root of your BIOS or MBR to avoid detection and removal. Unless you are an expert working with system and registry files, you should use expert tools or programs to wipe your system clean, and protect your data and PC from future attacks. Otherwise, you could damage your hard drive and wipe clean your valuable data.