Several variations of rogue anti-spyware programs, such as XP Antivirus 2011, are known to prevent SpyHunter and other legitimate security applications from running on a PC. These malevolent programs may break the association with Windows .exe files, which will prevent executable programs from running. Basically, when a malicious program such as XP Antivirus 2011 is installed on a PC, Windows will no longer recognize the .exe file extension. In such a case, Windows will prompt a computer user to select a program that the computer user may want to use to open the file. An example would be when computer user attempts to open a .doc file, the association is normally linked with the Microsoft Word application. In the case that the association for the .doc file is broken, Windows will automatically prompt the user to select a program to open the file with.

Usually file extensions are assigned a specific program to open by default when a file with the extension is executed. In the event that Windows does not recognize the file extension, a dialog box called 'Open With' will ask the user to 'Choose the program you want to use to open this file.' Newer versions of rogue security programs, such XP Antivirus 2011, are designed to exploit this functionality leaving the computer user unable to install or run any executable application including trusted security programs.

Figure 1. - 'Open With' dialog box from attempting to execute the installation of an .exe file. 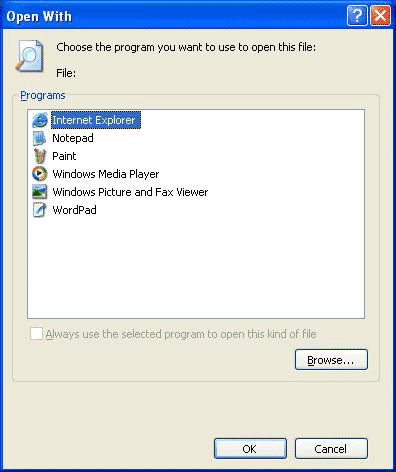 When a computer is infected with XP Antivirus 2011 or any of its variations and they attempt to open any program, including a legitimate spyware removal tool such as SpyHunter, they may be prompted with the 'Open With' dialog box. This happens because the association with .exe files have been manipulated by XP Antivirus 2011 or one of its aliases.

An alternative to installing SpyHunter for PC users has been implemented for users who may be experiencing the .exe association issue. Additionally, users may not be able to download the alternative SpyHunter installer normally. The special file named 'SpyHunter-Installer.com' (listed below) must be downloaded to fix the .exe association problem. Utilizing the download link below will allow computer users to successfully install SpyHunter on their system after the SpyHunter-Installer.com download has been executed.