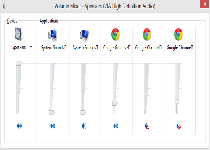 The Audio Ads Virus is a colloquial name for Trojans, adware and similar PC threats that play streaming audio advertisements automatically. Some of the most infamous of these, such as Rootkit.Boot.Harbinger.a, are high-level PC threats that require extremely thorough anti-malware strategies to remove from your computer. An Audio Ads Virus often is identifiable only by its obvious symptoms, which may cause performance issues but, for the most part, are just one facet of an invasive PC threat that may conduct other attacks against your computer. Naturally, malware researchers suggest deleting an Audio Ads Virus through any means necessary.

The Virus that Gives You an Earful of Its Symptoms

The Audio Ads Virus is a generalized term that may refer to any Trojan that displays its characteristic trait: auto-playing audio advertisements that often are represented as additional browser streams in your PC's volume manager. Besides their being distracted and intrusive, Audio Ads Virus's advertisements may be opened in multiple channels simultaneously, which may cause extreme performance problems for the infected browser. Unlike most kinds of adware, malware researchers often associate the Audio Ads Virus with high-level PC threats, such as backdoor Trojans and rootkits.

Taking out the Virus that's Taken over Your Eardrums

As of early January 2014, new variants of the Audio Ads Virus appear to be using a non-consensual installation method that malware researchers estimate to involve attacks from compromised advertisement networks. Updating your software, disabling exploited Web content (like scripts) and, of course, having anti-malware security can provide different methods of blocking the strategies that could be used to install an Audio Ads Virus. However, these reports are based, in part, on circumstantial information, and further analyzes of the Audio Ads Virus's distribution may be forthcoming.

Random Audio Ads Virus Trends Graph ? The numbers shown on the graph indicate how many searches have been done for a particular term, relative to the total number of searches done on Google over time. This data doesn't show absolute search volume numbers, because the data is normalized and presented on a scale from 0-100. Each point on the graph is divided by the highest point, or 100. When we don't have enough data, 0 is shown.

This graph shows the search volume trend and popularity over time for Random Audio Ads Virus. Hover your mouse over the graph to evaluate different points on the graph.

If you are concerned that malware or PC threats similar to Random Audio Ads Virus may have infected your computer, we recommend you start an in-depth system scan with SpyHunter. SpyHunter is an advanced malware protection and remediation application that offers subscribers a comprehensive method for protecting PCs from malware, in addition to providing one-on-one technical support service.