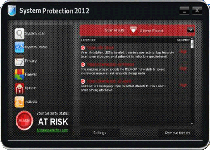 A few examples of System Protection 2012's pop-ups that SpywareRemove.com malware analysts have dug up include, but aren't limited to:

Windows Security Alert
To help protect your computer, Windows Firewall has blocked some features of this program.
Do you want to keep blocking this program?
Name: Zeus Trojan

svchost.exe
svchost.exe was replaced with unauthorized program.
It has encountered a problem and needs to close.
If you were in the middle of something, the information you were working on might be lost.
Please tell Microsoft about this problem.
We have created an error report that you can send to us. We will treat this report as confidential and anonymous.

Warning! Infection found
Unwanted software (malware) or tracking cookies have been found during last scan. It is highly recommended to remove it from your computer.
Keylogger Zeus was detected and put in quarantine.
Keylogger Zeus is a very dangerous software used by criminals to steal personal data such as credit card information, access to banking accounts, passwords to social networks and e-mails.

Windows Security Center
Serious security vulnerabilities were detected on this computer. Your privacy and personal data may be unsafe. Do you want to protect your PC?

Under no circumstances should you ever trust these inaccurate pop-ups, even if they're accompanied by real program failures; they're only created to give you a reason to purchase the full extent of System Protection 2012's (nonexistent!) anti-malware features. Even contact with System Protection 2012's website should be considered ill-advised, since it may result in other attacks on your PC via malicious scripts and other types of web browser exploits.

If you are concerned that malware or PC threats similar to System Protection 2012 may have infected your computer, we recommend you start an in-depth system scan with SpyHunter. SpyHunter is an advanced malware protection and remediation application that offers subscribers a comprehensive method for protecting PCs from malware, in addition to providing one-on-one technical support service.

HKEY..\..\..\..{Subkeys}HKEY_CURRENT_USER\Software\System Protection 2012HKEY_LOCAL_MACHINE\SOFTWARE\Microsoft\Windows\CurrentVersion\Run "[RANDOM CHARACTERS]"
Your comment is awaiting moderation.
Please verify that you are not a robot.