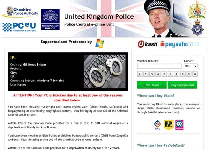 The United Kingdom Police Ukash Virus: Less of a Policeman and More of a Rasher Than It Wants You to Know

Other than its typically fraudulent pop-up warning, the United Kingdom Police Ukash Virus also may:

If you are concerned that malware or PC threats similar to United Kingdom Police Ukash Virus may have infected your computer, we recommend you start an in-depth system scan with SpyHunter. SpyHunter is an advanced malware protection and remediation application that offers subscribers a comprehensive method for protecting PCs from malware, in addition to providing one-on-one technical support service.