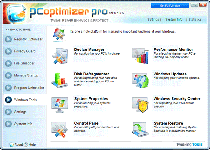 Keeping PC Optimizer Pro Away from Your PC

PC Optimizer Pro doesn't have any currently-known clones and doesn't bear a strong visual resemblance to other rogue security program families, such as the group of fake anti-virus programs that include Windows Inviolability System and Windows Armament Master, or the family of rogue defraggers that include System Repair and Windows Repair. However, in sheer behavior, PC Optimizer Pro is as good as identical to most other rogue programs.

The following are the three most likely ways of becoming infected with PC Optimizer Pro:

Is your PC running slow? To safely check for Windows registry errors that cause system crashes and slow PC performance, we highly recommend you run the registry repair tool listed below.
Download RegHunter's* Free PC Diagnosis to Detect Registry Errors