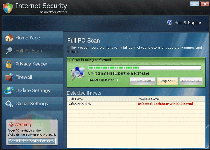 Internet Security Plus: Subtracting from Your Safety... and Asking You to Pay for It

Superficially, Internet Security Plus is crafted to look just like any other anti-malware scanner, with a generalized set of security features that crystallize around the concept of protecting your PC from online PC threats and malicious software alike. However, peering behind Internet Security Plus's looks, you'll see that these features just are skin deep – since SpywareRemove.com malware experts didn't need more than a little time to verify that Internet Security Plus can't detect malware or attacks against your computer at all.

By far, Internet Security Plus's most hindersome attack is its tendency, like all FakeRean-based rogue anti-malware programs, to monitor which programs you're using and terminate them arbitrarily. Among the numerous clones of Internet Security Plus are Antivirus 2008 Pro, Windows Antivirus 2008, Vista Antivirus 2008, Antivirus XP 2008, PC Clean Pro, Antivirus Pro 2009, AntiSpy Safeguard, ThinkPoint, Spyware Protection 2010, Internet Antivirus 2011, Palladium Pro, XP Anti-Virus 2011, CleanThis, Rogue.Vista Antivirus 2008, XP Home Security 2012, XP Security 2012 and AntiVirus PRO 2015. Since SpywareRemove.com malware researchers often observe this attack being performed through an EXE name-based block list that excludes some baseline Windows programs, one of the simplest ways to work around this software blockade is to rename your program file to the name of an essential Windows program. However, disabling Internet Security Plus also is recommended before you try to disinfect your computer.

If you are concerned that malware or PC threats similar to Internet Security Plus may have infected your computer, we recommend you start an in-depth system scan with SpyHunter. SpyHunter is an advanced malware protection and remediation application that offers subscribers a comprehensive method for protecting PCs from malware, in addition to providing one-on-one technical support service.