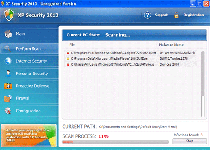 XP Security 2013 acts like an anti-malware scanner with your best interests at heart, but XP Security 2013's system scans are inaccurate, its pop-up alerts warn you about threats that aren't on your computer and its functional features are all focused on dismantling your computer's built-in security. As a rogue anti-malware product, XP Security 2013 exaggerates the presence of malicious software on your computer as a twisted marketing scheme to get you to spend money on its software. Purchasing XP Security 2013 or even tolerating its existence on your PC for a moment longer than necessary should be considered dangerous to your machine, just like if you were allowing any Trojan or virus to remain intact on your hard drive.

As is generally true for rogue security programs, XP Security 2013 is identified primarily through its fake security pop-up alerts and other attempts to make itself seem like useful software. Nonetheless, SpywareRemove.com malware researchers are even more concerned with XP Security 2013's other attacks, which can disable your computer's security in the process of making it seem like almost every program on your hard drive is infected. These functions can include:

If you are concerned that malware or PC threats similar to XP Security 2013 may have infected your computer, we recommend you start an in-depth system scan with SpyHunter. SpyHunter is an advanced malware protection and remediation application that offers subscribers a comprehensive method for protecting PCs from malware, in addition to providing one-on-one technical support service.